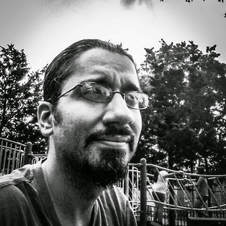 BIO-Hiram Melendez is a self-taught visual artist who resides in New York City.  He has been drawing with a ballpoint pen (his primary choice of medium) since 1987, and had studied under artist Anthony Palumbo (1923-2008) for figure drawing between 1992 and 1993, as well as artist Anthony Pellettieri (Print Making) in 2005 at the Art Student League of New York. Hiram consistently works to perfect and broaden his artistry, and is enthusiastic on finding new ways of creative expression both within and outside of the realm of drawing. For example, since 2011, Hiram has worked on a number of social-political collages (both digital and handmade) that has developed into a gallery exhibition and a book commission due out in 2014.

As an artist, Hiram believes that art is the best way to reveal one’s emotions and thoughts. His artwork is like a visual diary, as he expresses his strong fascination with life, death, and the world in which we live. Such topics explored in his art include violence, the plight of women and misogyny, religion, and the complexities of his childhood. Hiram believes he was born in the wrong time period, and is constantly trying to understand his deep and immediate past through artistic exploration. He uses the exploration of warped senses of reality and confusion to create a kind of balance with understanding the events and experiences that have made him who he is today.

ARTIST STATEMENT- My artwork takes a critical view of social and political issues and the sometimes mundane life we lead to survive our short existences. It serves as a visual diary of what is twinging me mentally, and thus I have the urge to hash it out on paper. I rarely plan out any conscious ideas of where my projects will go, but just let my emotions drive the drawing process. I am very detailed oriented when it comes to my artwork, which becomes an obsession that sometimes I cannot control.

In terms of my collages, my use of disfigured characters often reflects how I view a portion of the people in this world, the growing population of humans that are sadly losing touch with themselves (including their deepest emotions), and focus on the attainment of empty possessions. The world is full of ugly things, including the truth that accompanies where so many of us are heading spiritually. But who says that beauty cannot be found in ugliness? What’s wonderful about art is that I find the beauty in dissecting the very ugly emotional downfalls that I depict. Negativity can blossom into positivity. My art remains my diary; a journey into who I was, who I am , and who I am becoming.